By far my favorite episode of the Simpsons is when Lisa becomes a vegetarian. Toward the end of the show, during the falling action, Lisa finds a trap freezer in the Kwik-E-Mart. This 'magic tunnel' brings her to the roof of the store where Apu, Paul and Linda McCartney are hanging out. Turns out Paul, Linda and Apu are all vegetarians too. They are supportive of Lisa's decision, and Paul lets Lisa in on a little secret. If you play "Maybe I'm Amazed" backwards you'll hear a recipe for a "really ripping lentil soup". Well, although this was probably my inspiration, I got the actual recipe from Mark Bittman's "How to Cook Everything". I liked the look of the original recipe, but he also had a variation that subbed roasted garlic for the aromatics. I couldn't decide which to do, but I do love garlic, so I added some roasted cloves to the onion/carrot/celery mixture. I also added a little lemon juice for some acidity. The soup was really easy and straightforward...especially since the boyfriend recently bought me a vegetable peeler. I know that this is probably the most essential cooking tools that even college student posses in their grimy apartments kitchens...and I always intended to get one, I just always forgot! 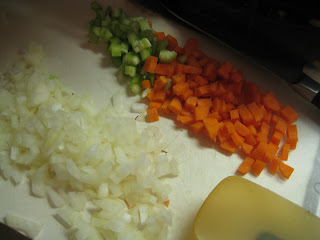 I made this on a Saturday morning after a long and stressful week. Something about chopping veggies makes me relax, and just makes me happy -- Look at those perfectly diced pieces of carrot! The peeler rocked by world. It made soup prepping so much faster. 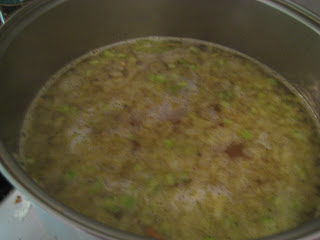 Here is the soup simmering in the pot. It was very good, but really plain too. I think next time I make it, it needs a little something extra. Maybe some curry powder or smoked paprika?
Posted by Alicia at 9:30 AM No comments: Links to this post

Imagine my delight at the end of a long week when the BF informs me that he is in possession of all the ingredients necessary to make our version of a sort-of-shrimp-scampi! He had made a special Trader Joes trip for shrimp the night before. We had made this dish once before when his sister was in town and it was delicious! It wasn't QUITE as good this time, but I think it was because some of the other ingredients (the shallots, garlic, etc) weren't as fresh. And he bought the frozen pre-cooked shrimp rather than the raw, which I think also contributed to lessening the flavor. Either way it was still delicious! 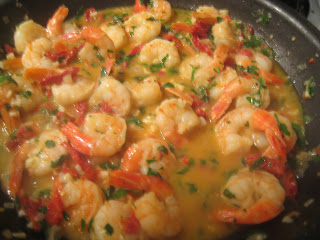 Here or the shrimps, they are cooking in some olive oil and butter, shallots, garlic, and lemon juice. 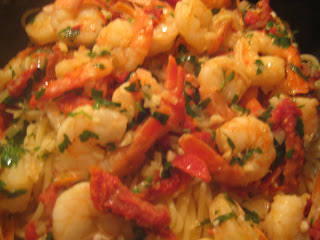 You can see the sundried tomatoes here. They are a new favorite of mine - I need to figure out other ways that we can use them. 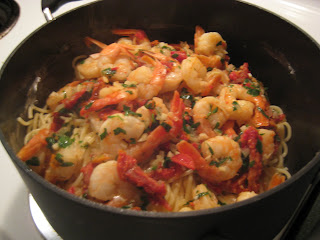 We mixed everything with some spaghetti..... 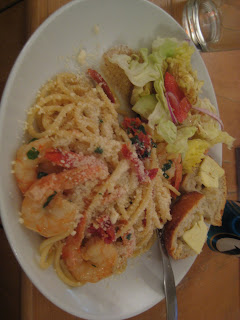 And had it with some salad and warmed french bread. I really love this pasta dish - and even more than that, I loved cooking with the BF in his kitchen (its SO much bigger than mine) while we both chopped and sauteed and listened to music. Great way to end the week and start the weekend.
Posted by Alicia at 3:01 PM 2 comments: Links to this post

Several weeks ago my local Shaws had "Pub Burgers" on sale, and I had to grab them for dinner with the boyfriend (I warned you that I love to cook for him). I froze them until last week, when i had the opportunity to make a meal out of them. I thawed the burgers overnight, then seasoned them with salt, pepper, and a little garlic powder. I seared my burgers in a hot skillet on both sides until they were about medium. The burgers were smothered with chedder cheese and carmelized onions. I served them on rolls that had been griddled in a separate pan with a little butter.


This is actually a picture of the boyfriend's plate because it was far prettier than mine. He loves lettuce, tomato, and pickle atop his burger. I instead, prefer to eat these additions separately....I know, weird. The pickles were his idea and they were top notch. We rounded out the meal with some steamed (organic) green beans, and some oven 'fried' french fries (those are on the plate in the way-back). I sliced some potatoes into thin french fry shapes...drizzled with a little olive oil, salt, pepper, and a little garlic powder and paprika. Bake at 350 for about 30 minutes or until golden and crispy. This meal always goes over well with the BF.
Posted by Alicia at 4:49 PM No comments: Links to this post