I am lucky enough to work among a group of very tech-savvy individuals. They all know what blogs are, and twitter, facebook, etc. So I have a very captive blog reading audience (I'm still trying to get my mom to add my blog to her "favorites" - she's trying). It's exceptionally hilarious when I'm walking through the halls on my way to a meeting, or printing up a PowerPoint, to have a co-worker yell across the room "hey, great chicken last night!" For anyone at work that doesn't know about the blog - they probably think I'm absolutely nuts, or am hosting tons of dinner parties to which they are never invited...

This particular post is a virtual shout-out to one of my blog readers - I know for a fact that he's elevated my blog to a "fun stuff" category on his RSS feed. He recently mentioned that I have a lot of recipes on here that use TONS of butter...and he's right. So David, here are some veggies, just for you. And nary a pat of butter in sight....

As I've mentioned numerous times, I receive bi-weekly deliveries from Boston Organics. During the winter and early spring, the produce relies pretty heavily on wintertime staples. Squash, kale, potatoes and carrots come nearly every delivery. For a while I was cutting my carrots up as carrot sticks with my lunch...then I made a couple soups. Finally I tired of them and they were forced to the back of the fridge where I could ignore them....

Once I had 3 pounds of carrots and it was difficult to ignore any longer, I decided I needed to do something with them. *** As a side note, after years of buying those little baby carrots, only to have them turn to mush in a week or so in that gross slimy bag, I was amazed at how crisp the carrots remained during their lengthy stay at the back of my fridge...another testament to reducing the amount of processing in food I suppose...I mean, what is that slimy stuff anyway?***

I decided that I would make a big batch of carrot coins - then freeze them in little batches to reheat as a side-dish for dinners...Green Giant has nothing on me. 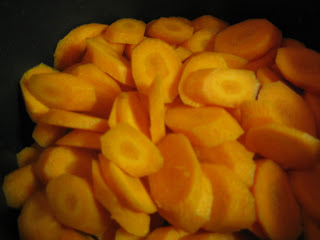 I started by peeling the carrots, then slicing them into coins. I put them all in a 3 quart sauce-pan with a tablespoon of olive oil (no butter!), a 1/4 cup of maple syrup, 1/2 cup chicken (or vegetable broth), salt, pepper, and a 1/2 tsp of ground ginger (you could use fresh here too - just a little bit less since fresh is so much stronger) 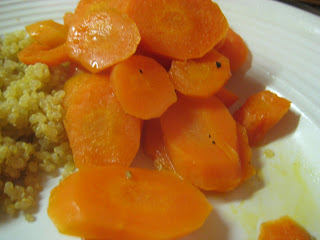 Once everything was in the pot, I brought the liquid to a boil, then covered and reduced to a simmer. This cooked until the carrots were tender and the liquid reduced slightly to create a glaze. This made a TON - so I froze them in little 1 cup containers for easy re-heating.

Email ThisBlogThis!Share to TwitterShare to FacebookShare to Pinterest
Labels: Carrots, side dish, veggies