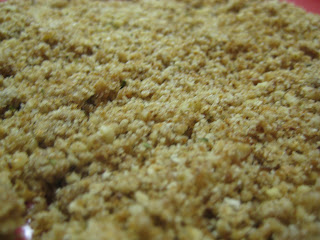 I ground up the pecans into a coarse meal, mixed with salt, cayenne pepper, and about half as much fresh breadcrumbs (I had been very diligent lately about saving old heels of bread loaves, stale artisan breads, etc...I toasted the bread then ground it myself in a food processor). I dredged the fillets in milk, then in the nut breadcrumb mixture. In the meantime I melted a tablespoon of butter in a large skillet. 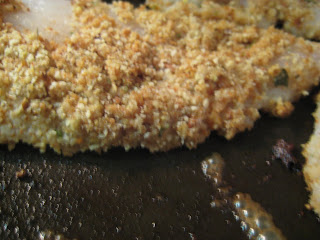 I then layed the fillets in the pan in two batches. I pan fried each side for about 3-4 minutes until they were golden brown.
While they were cooking, I started on my first ever beurre blanc. 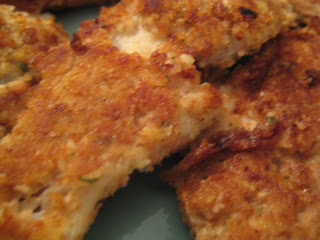 I also did some research on the 'traditional' beurre blanc. I made substitutions based on what I had in my pantry/fridge. Since many recipes asked for shallots - I subbed about 1/4 of a small vidalia (sweet) onion. I had white wine, but no white vinegar - so I used rice wine. I did possess about 6 sticks of butter in my fridge, so I was fine on that front. I chopped the onion very fine and cooked it until translucent. I then added the wine and vinegar and let the alcohol cook out for a minute or two. I then shut off the heat and let the mixture begin to cool. Once almost totally cooled, I started whisking in pats of butter, about 6 tablespoons (I know that sounds like a lot, but I assure you, only a little bit of sauce was used per serving), then I threw some chives in at the end. 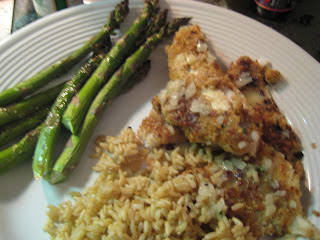 I plated the fish with some brown rice and roasted asparagus, then topped the fish with a drizzle of the beurre blanc.
I plan on working with this fish recipe a little more before I post the exact recipe. I think the flavor was great, but some elements of the dish still need work. The sole was delicious and tender, but was kind of flimsy and fell apart easily when flipping. I would like to try a slightly firmer white fish like tilapia or cod. Also, I ground the nuts in my Magic-Bullet blender, which made for an uneven grind. I'll suck it up and pull out the cuisinart food processor next time and see if that gives a more even chop.