After returning from San Francisco, and settling back into life and my kitchen...I came down with a horrible cold. I subsisted entirely on a backlog of soups from my freezer and toast. By the following Sunday after a few days on antibiotics, and a restful weekend, I felt prepared to entire the realm of the kitchen again. I wanted to make something special but I was still under the weather enough that my inspiration was lacking.

I called the boyfriend and asked him what he was in the mood for, and would he join me for dinner (he has it tough doesn't he?). He reminded me that in our 2+ years together I've never made chicken Parmesan...
This was a somewhat impromptu dish and I only had a little bit of marinara sauce on hand. I did however, have a ton of plum tomatoes. I sliced the tomatoes in half, and seasoned them with salt, pepper, thyme, and drizzled them with a tiny bit of balsamic. I then roasted them in the oven at 400 for about forty minutes.

While those were roasting I started working on a pack of 4 chicken breasts (on sale - woo). I butterflied three of them and froze the fourth - (I have a small oven and couldn't possibly fit 4 butterflied breasts). I then passed the chicken through the requisite breading process, seasoned flour, egg wash, and a mix of half breadcrumbs, half Parmesan cheese, thyme, oregano, salt and a little bit of cayenne pepper. The boyfriend is currently having a bit of a love affair with cayenne, and I figured just a dash would be nice. After breading the chicken breasts, I heated a little olive oil in a nonstick pan, and cooked the chicken until the outside was browned and golden, and then put the chicken in a baking dish.

When the tomatoes were slightly caramelized, I removed them from the oven. The skin was very easy to remove - so I took the skins off, then roughly chopped the tomato halves. I mixed the chopped tomatoes with the little bit of marinara sauce, garlic, onions, and red wine. Then let the mixture warm through in a saucepan.

Once I was happy with the flavor of the sauce, i put a little bit in the bottom of the baking dish (to prevent the chicken from sticking), I then layered the chicken on top - and then topped each breast with a little bit of sauce. Each dollop of sauce was then topped with a thin slice of buffalo mozzarella, and Parmesan cheese. I baked this in the oven until the cheese was melted and starting to brown...and of course, the chicken was cooked through... about 15 minutes.

I served it with pasta and the reserved sauce....and topped everything with a chiffonade of basil. 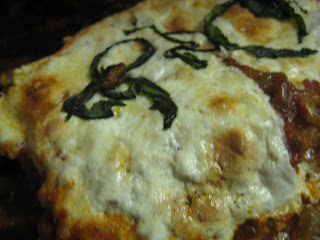