Now, I would be remiss to mention my dinner with Kiley, and not document another dinner that I merely contributed to...but did not plan. I was again spending the weekend in CT visiting my law-school attending boyfriend. Friday night Rafe, his sister, mother, and his mother's boyfriend and I all sat down to enjoy a delicious meal.
First up was the drink-master. Aliza used to work behind the bar at a Senegalese restaurant when she lived in San Francisco (she has since moved again to Seattle, so hopefully Rafe and I will visit her and also get to eat our way around that city). She put her mixing skills to work on some great vodka drinks...vodka, and raspberry-lime seltzer....these were delicious! 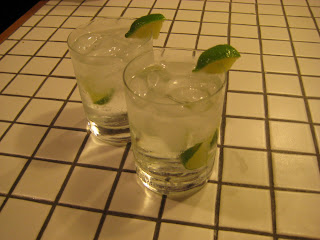 Rafe had marinated and cooked the chicken the evening before. So the chicken only needed to be re-heated in the oven. He had made apricot ginger chicken and it was delicious! The outside had a sweet/savory glaze and the meat was tender and juicy. He claimed he used too much ginger, but I think that he was just being modest. It was GREAT! 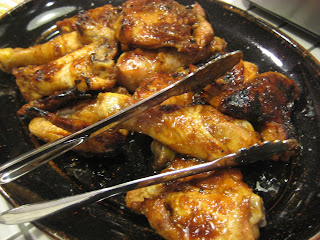 Lee (Rafe's mom) contributed a delicious dish - as if I had any doubts. She made a macaroni and cheese. It had swiss chard mixed into the cheese sauce, and there were crunchy, buttery breadcrumbs all over the top of the casserole. It was a great compliment for the chicken - I went back for seconds of both! 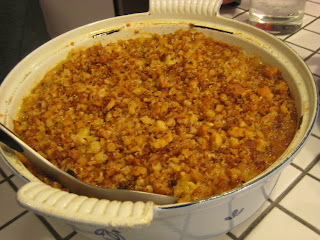 I always enjoy helping out in the kitchen, and I was tasked with making the salad. The plan was a corn, tomato, avocado and mozzarella salad. Unfortunately, the fresh mozz was a little past its prime. While I was in Las Vegas I had a similar salad that used feta cheese, so I suggested the substitution. Rafe LOVES feta so my idea was accepted and I got to work! The corn had already been cooked, so I just needed to remove it from the cob...I cut the heirloom tomatoes, and Rafe cubed the avocado. We mixed it all together, added the feta and some lime juice. 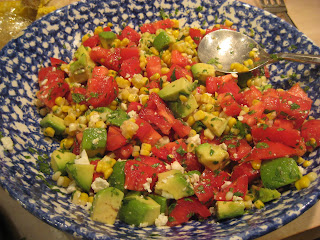 Once everything was warmed up and the salad was dressed we made our plates and sat down at the table... 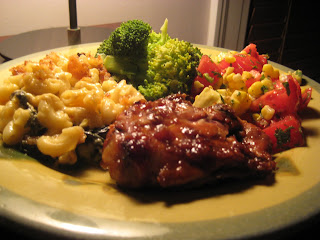 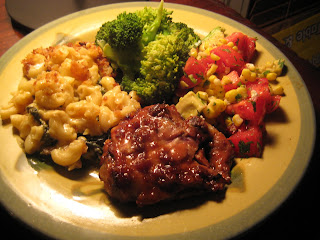 Here is a little look at the final product. I believe this is actually Rafe's plate. He is my 'creative director' and thought his plate looked better - so it made the blog.
Posted by Alicia at 12:05 PM