I've been delaying this post, because I'm totally worried that I won't be able to do New Orleans justice.  My trip  was awesome - I ate my way around the city, and returned completely refreshed.  New Orleans was possibly the friendliest US city I've ever visited - and one of the only places I've ever been that most people are as obsessed with food as I am.  I'm going to break this up into 2 separate posts of 3 different meals - since I don't want the post to go on forever!

Dave, Rafe's longtime friend, was our host. When we arrived in town late on Friday Dave picked us up.  Upon arriving at his apartment we were totally exhausted from our travels (I had left my coat on our connecting flight in Houston and had to race around the Houston Airport to retrieve it) so after a beer and some catching up it was off to bed for us!

Saturday morning we had brunch plans.  We were attending the New Orleans St. Patricks Day parade and wanted a good base for our green beers.  We met up with a bunch of Dave's med school friends and headed to EAT in the french quarter.  We came toting a bottle of champagne since EAT is BYOB and we wanted mimosas with our breakfast....Drinks before noon? Already I was liking this city's style.

Rusty (a friend of Dave's) ordered the fried green tomatoes remoulade - I had never had a fried green tomato, and Rusty seemed nice, so I stole a bite.  They were tasty - that red sauce, the remoulade, was tangy and a little spicy.  The batter on the tomatoes was crispy and well seasoned, and the tomatoes inside were sweet and juicy.  I didn't eat the shrimp or the spinach though - needed to save room for my giant breakfast. 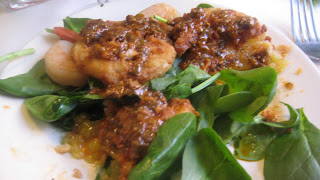 I ordered the brunch special of the day.  Two pan seared scallops on a bed of cheese grits, with a poached egg and hollandaise.  Cheese grits are the best thing going.  Creamy, cheesy, carby goodness.  It was accompanied by the biggest biscuit I've ever seen. 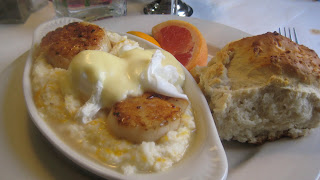 My breakfast was really rich, so I wasn't able to finish it entirely - but I put a serious dent in it.  I ate the whole egg and both scallops, just left some grits and some biscuit behind. 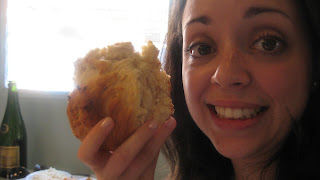 The biscuit with a little bit of context: it was as big as my face - please ignore the crazy eyes - we ended up with more than one bottle of champagne (seen in background).  I shared the biscuit with another member of the table who did not get one with their breakfast.
EAT was a great intro to the city - and to some classic southern foods! Grits, fried green tomatoes - and I also had a taste of andouille from Dave's friend Alli's plate....Dave's friends were good sharers! And we were fully prepared for fun at the parade: 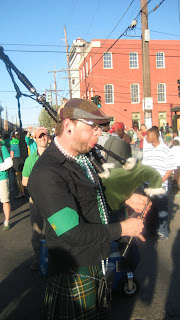 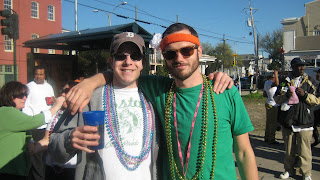 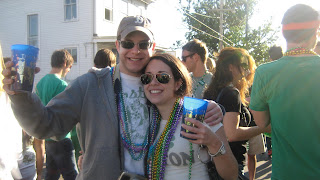 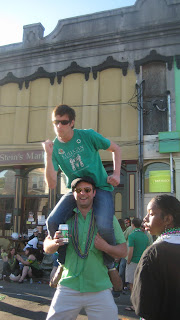 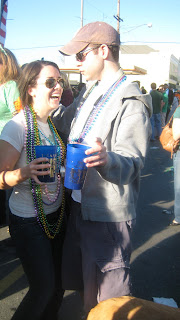