Usually on Mother's day my father and I take my mother and grandmother out to brunch at the local country club.  The club has a big breakfast/brunch buffet, and we have a great time.  This year, due to a scheduling conflict, there would be no brunch at the club.  Also, since we had just gone out the dinner the previous weekend for my mom's birthday, she requested that we have brunch at home instead.

She wanted to cook it herself, because she is nuts.  But I took charge.  In fact, I already had an idea of what I would like to make.....This past New Year's I made a list of dishes that I wanted to make in 2010.  Things like, roast duck, raviolis, and arepas....Inspired by We are Not Martha's post, cinnamon rolls made the list as well.  I decided mother's day was a perfect occasion, so I made the bon apetit cinnamon rolls with cream cheese glaze by Molly Wizenberg, courtesy of Epicurious. 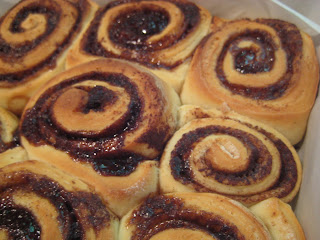 The cinnamon rolls were a lot of work, but they were incredible.  I had to resist the urge to gobble them up right when they came out of the oven....They needed a few minutes to cool before being frosted.  I took this time to set up the table with the rest of the meal.  These were for my grandmother - she has developed quite a sweet tooth. 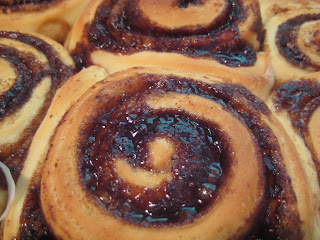 My mom prefers savory breakfast fare (though I think she was smitten with those cinnamon rolls)!  For her I made the asparagus, prosciutto, and goat cheese fritatta.  I was really disappointed in the asparagus selection at the market!  They were big and thick and stalky.  I trimmed the stems and cut them in quarters and they were much better. 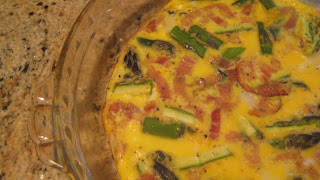 My father is allergic to eggs, but I wanted to make sure he got plenty to eat (and didn't gorge himself on the cinnamon rolls) so I made him an open face sandwich using the components from the fritatta on a piece of toast, and baked it for a few minutes until the cheese became melty. 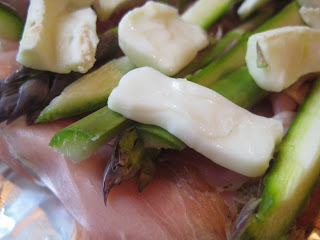 In addition to the cinnamon rolls and fritatta we also had crispy bacon, and some delicious sweet and fresh strawberries. 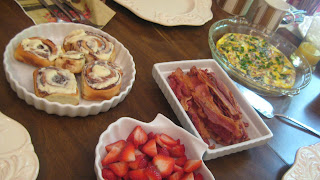 There had to be something healthy on the plate! 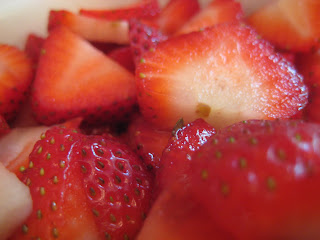 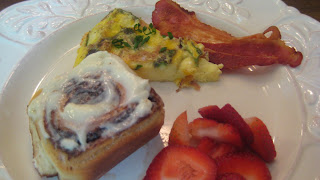 It was really fun to cook for two of the women who cooked for me so much of my life....My mother was definitely nervous at first about the cinnamon rolls (YEAST in my kitchen??!!)- she was never a big fan of baking, though her carrot cake is OUT OF THIS WORLD.  My mom also has a gorgeous kitchen, and I can't help but think that she was worried that I would make a HUGE mess....but I tidied up after myself.

It was a gorgeous day and a great meal!
Posted by Alicia at 11:42 AM