Well, I just got a new camera - so I'm putting the old one to bed.  It took great pictures and was really easy to use, but somehow a piece of dust or something got into the lens, and there is a big dark spot in the middle of all of my pictures. There are a few pictures still on my memory card, so I decided to make a post dedicated to my Canon Powershot SD1000 - these are the last dinners I have to blog from my old camera.

You've been good to me old friend.  Thanks for the memories!

Breakfast Pizza:
I have seen a lot of these 'breakfast' pizzas on the Internet (meaning pizza's with eggs baked on top) - my favorites being Elina's and Deb's. 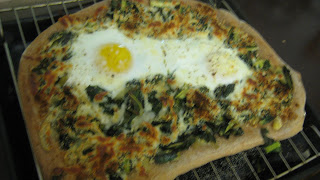 The crust is a whole wheat crust from Trader Joe's.... The greens are kale sauteed in a little olive oil with onions, garlic, and crushed red pepper and the pizza is topped with a little bit of mozzarella and Parmesan cheese. 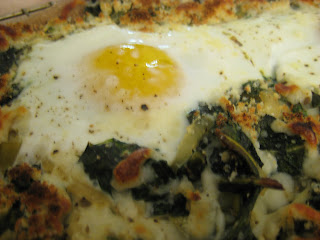 I started by blind-baking the crust for a few minutes - I like my crust really crispy and almost charred.  I then topped the crust with the greens and cheeses.  I made 2 little wells in the toppings, and cracked an egg in each of them.  I seasoned the eggs with a little salt and pepper (the same way I do when I make myself a sunny-side up egg.

In true Clean Plate Club tradition, this 'breakfast' was actually for dinner....and again for lunch the next day.  It was YUMMY.
Vichyssoise, or Potato Leek Soup:
Wow, I made this a long time ago.  I had gotten leeks, potatoes, and parsnips in my Boston Organics Box and it was early spring.  I wanted to make a soup that could be served hot or cold, since the weather was (and still is) being a little non-committal. 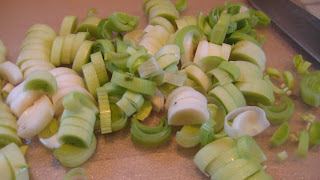 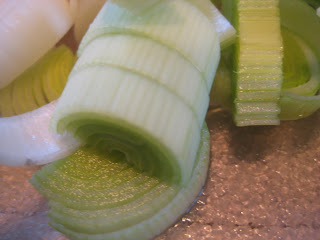 I started by cleaning and chopping my leeks, and then sweating them in a pot with a little oil. Once they were soft, I added 4 cups of chicken broth and 2 cups of water....and a now undetermined number of potatoes and parsnips....I cooked until the tubers were soft.  Then blended the mix. 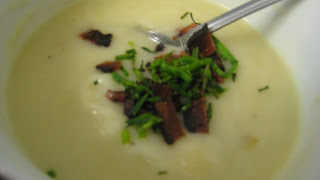 I topped the soup with black forest bacon from whole foods, and some chives.  Yum! 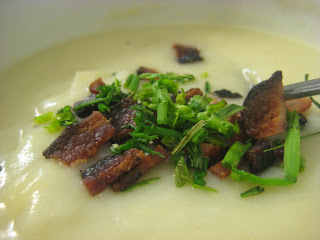 So I believe that is that last of the canon pictures. It was a great camera, and I did use it nearly every day, so I certainly got my money's worth!  My next posts will be with my new Nikon Coolpix 8000.  I'm really happy with my purchase so far....!