OH BOY....what a week I've had.  This time last week I was just settling in for my cooking class at King Arthur Flour after a drive up to Vermont with Megan, Michelle, Kristen, Kersten, Meghan, Elina, Jen, Katie and Bridget.....

After an AMAZING class, a wonderful dinner, and a cozy breakfast at a Vermont bed and breakfast, I drove Meghan, Elina, and myself back to Boston.  From there I packed another bag and headed to the airport.

Sunday night a coworker and I headed to Las Vegas for a conference.  Another slew of delicious meals, a few slot machines, and a couple cocktails later and we were on the red eye back to Boston.  We arrived back in the city early Thursday morning....and I'm still acclimating to east coast time, argghhhh!

While I was in Vegas I had some wonderful meals like Frosted Flake French Toast: 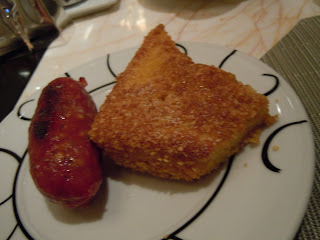 pictured here with an apple and chicken sausage.
or the egg white fritatta with goat cheese, mushrooms and asparagus: 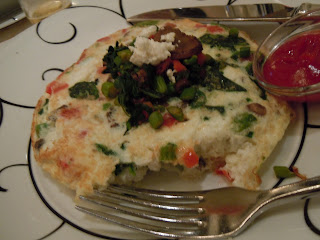 And an amazing po'boy at Emeril's restaurant, Table 10.  This portion looks small because it's only 1/2 a sandwich.  I was lucky enough to dine here with some friends and colleagues who love food and were happy to order a bunch of appetizers and entrees to share. 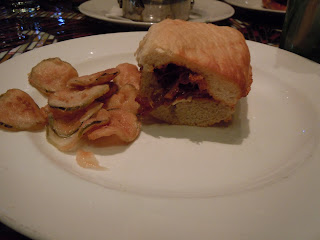 In addition, I had some delicious Kobe beef meatballs, osso bucco, and penne vodka.  And the star of the show?  Oreo zeppoli.
Suffice it to say, I'm a little behind with my posting, cooking, and general food adventures (also, exercise - all that eating in the past week and very little moving makes for a sluggish Cici).
I apologize in advance that you will shortly see some posts from me covering events that you may have read on other blogs - but I will catch up soon.
Though I only landed on Thursday morning, I've already been cooking up some new stuff in my kitchen.
Stay tuned!!
Posted by Alicia at 12:45 PM