Remember last year when I went to New Orleans?  I had some serious fun, and some delicious food.  When we were there, we stayed with Rafe's friend Dave who is down in Louisiana becoming a doctor.
Recently, I had read about a po-boy fest happening in New Orleans and half-kiddingly suggested that Dave and his girlfriend Jen visit and write a post for my blog...I expected them to just shrug it off - but they actually went!  and wrote a post complete with photos.  I love that our friends are foodies too.
Read on to learn about some of the sandwiches that Dave and Jen encountered!!
You usually find classic New Orleans po-boy sandwiches in small, family-run shops – each of which has a reputation for a specialty po-boy that borders on perfection.  Domelise’s off-the-menu special (fried shrimp and fried oysters fully dressed with swiss cheese and roast beef gravy), Mahoney’s shrimp remoulade and fried green tomato, Liuzza’s barbeque shrimp, the list goes on.
But at the 4th Annual New Orleans Po-Boy Preservation Festival, restauranteurs from all over the city convene to show off their best take on New Orleans’ official sandwich.  That’s where we headed this weekend to find some of the more unique offerings that we don’t usually see at the go-to po-boy shops.  The Oak Street section of the Uptown / Carrolton neighborhood has just the right sort of personality to host a food festival - its sidewalks were recently revamped for outdoor dining and it’s dotted with restaurants, music shops, art galleries and coffee shops,.  We saw a few people walking around with “Keep Oak Street Awkward” t-shirts, a self-effacing twist on the “Keep Austin Weird” movement. 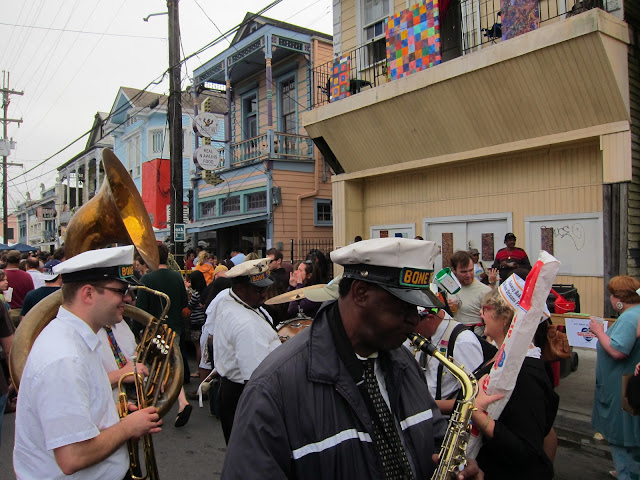 The festival drew a huge crowd, and everyone seemed to have one attitude in common:  we’re here to have a great time, but the search for the perfect po-boy is to be taken very seriously.  There’s an official ballot with awards for “Best in Show” and various sub-categories for seafood and meats.  It’s like a city-wide Top Chef challenge.
We listened to some live music at the entrance and were ready to start eating, but we found it difficult to dive right in.  You don’t want to waste precious hunger on a boring or otherwise ill-conceived, confused sandwich.  So we perused, chatted up people in line, and kept our eyes peeled for our first strike. 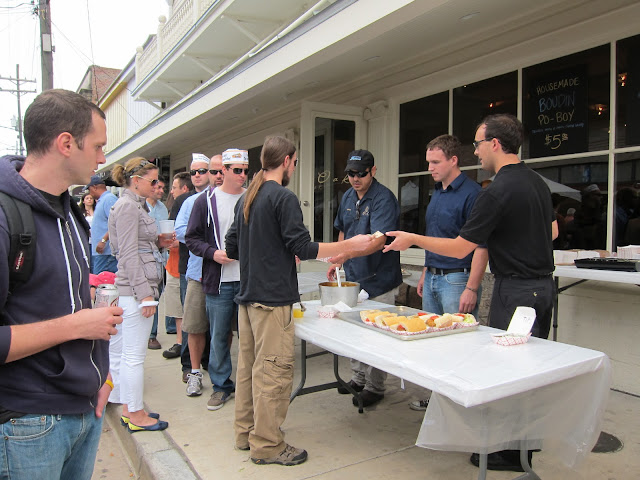 We wandered up to the booth for Barcelona Tapas.  I’d checked out their menu on the festival website and liked the looks of the Spanish-style pork loin medallions and gouda po-boy.

If it looks a little lackluster that’s because it was.  There was something nice about the combination of salty pork, sweet grilled peppers and melting gouda, but I was looking for something sloppier.  This po-boy was trying to be a little too delicate, so I crushed it.
While in line, we overheard a couple talking about a good fried shrimp po-boy with an asian twist.  I was in the mood so I went for it.  Made by Zea’s seafood, a local chain, this po-boy was appropriately moving more in the direction of sloppy.  Here’s a picture of the last bite. 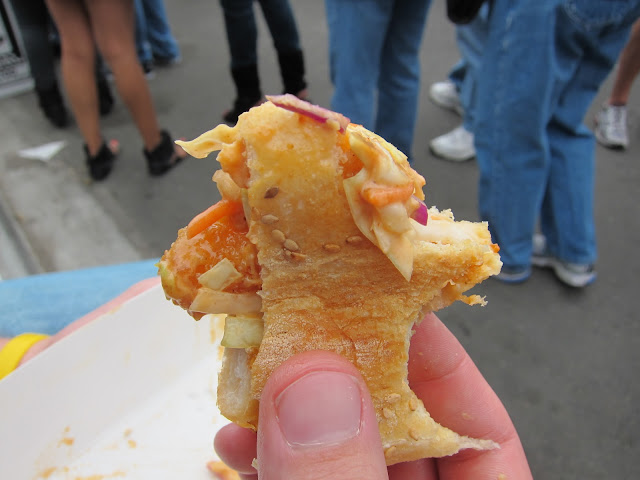 I liked the combination of roasted almonds, spicy slaw and battered fried shrimp.  But just before I left the stand, I caught a glimpse of a store-bought-looking vat of sweet and sour sauce they were drizzling on the shrimp.  This was a junior-varsity move that immediately took them out of the running for my favorite of the day.
We needed a breather so we walked through some of the art galleries and t-shirt shops.
It was time to get back to business.   On a tip from a friend, I went for a fried grits and grillades po-boy dressed with spicy tomato sauce from Le Citron Bistro. 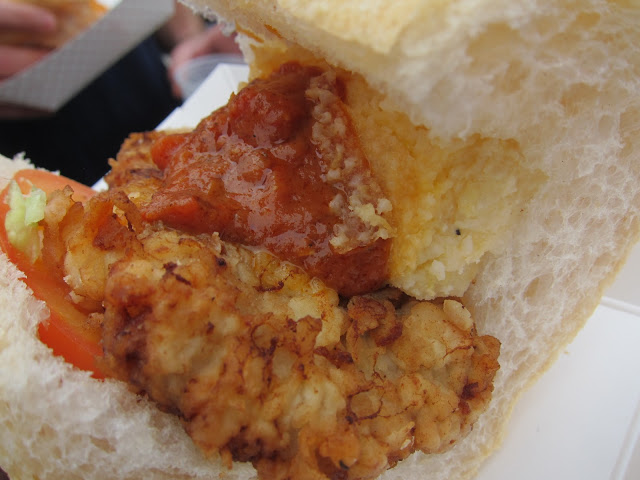 On paper it had all the components of something dank but unfortunately it fell flat.  The grillades was cold and tomato sauce didn’t have enough zip so I had to douse it in Crystal hot sauce.
Next we stopped at GW Fins.  This year they had a fried Maine lobster chunk tossed in Crystal hot sauce dressed with crispy Bibb lettuce and vine ripe tomatoes po-boy.  There was a fat man posted up at the po-boy retrieval section of GW Fins’ stand and I asked him why there was no line for this apparently filthy po-boy.  He had just sunk his teeth in so he gestured with his elbow up a side street.  I looked and saw a full block-long line of people waiting for sandwiches.  Then I looked behind the counter and there were only five po-boys left.  I didn’t know it at the time but the fried lobster was the eventual winner for this year’s “Best in Show.”  Had I known, I definitely would have asked the fat man for a bite. 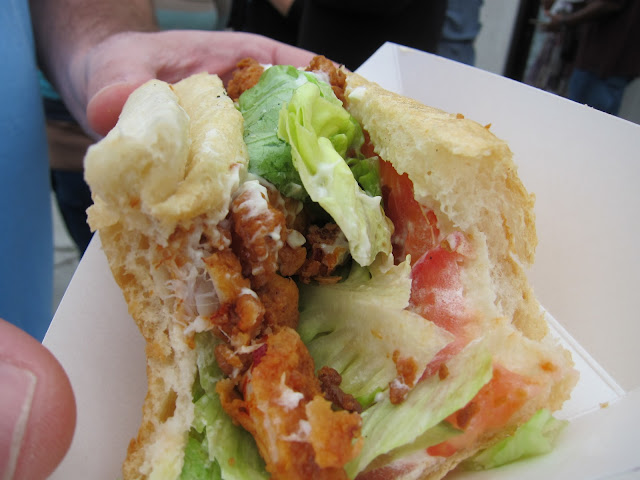 After letting that one slip away, it was time to get serious about harpooning this year’s white whale.  This late in the day, there is a tendency to panic and just habitually join a line without careful inspection of what’s on the other end.  But by doing so you run the risk of taking yourself out of the game with a throw-away fried shrimp, lettuce and tomato po-boy. 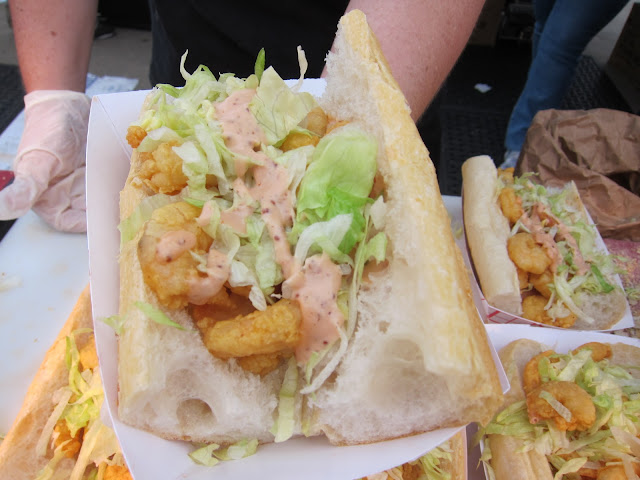 Thankfully we ran into some friends who were talking very seriously about a cured meat-themed sandwich they enjoyed at a nearby cluster of stands.  We reloaded at an ATM, got a beer and hopped in line.  The good people at Grande Isle (winners of the last two years’ “Best in Show”) were coming at us with a very special sandwich.
Dubbed the “Boucherie Po-boy,” the bread was spread on both sides with a “liver cheese” (paté), and inside were three home made meats: head cheese, smoked pork and bologna.  It was dressed with freshly sliced green peppers, carrots, cucumber and raw red onion.  They added three curls of pork fat cracklin’s fresh out of the deep fryer and drizzled cane syrup over the top. 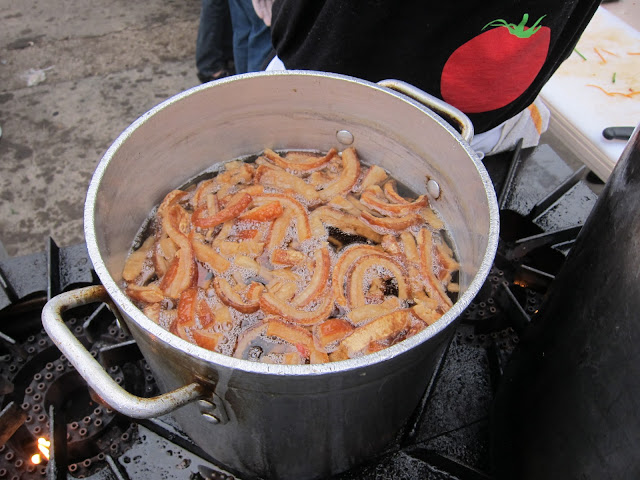 Paired with a dark ale, this was easily the highlight of the day.  They nailed the intersection of unwieldy sloppiness and sophisticated flavors.  Eating it felt like sitting for a complete southern meal.  We were not surprised to later hear that this sandwich was named “Best Pork Po-Boy” this year. 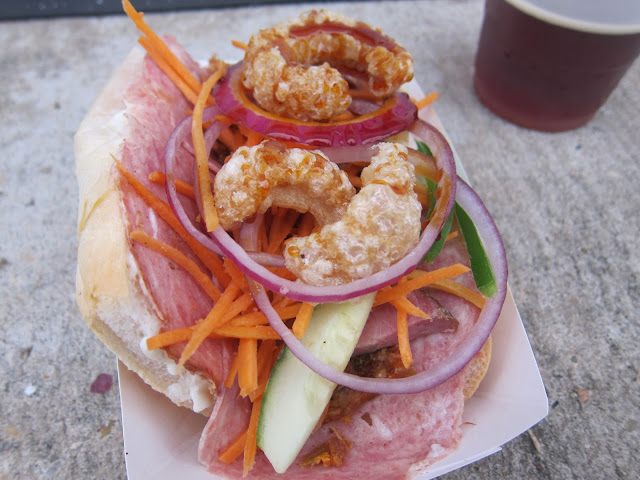 Bloated and burping, we wandered to the music stage pegged at the far end of Oak Street.  As the sun went down, the band started into Professor Longhair’s “Tipitina.”  Beyond the stage a freight train inched its way downtown against the backdrop of the grassy levee, and just beyond it, the Mississippi River.
As dinnertime rolled around, we went for the Palace Cafe’s BLT po-boy with a spicy Crystal aioli.  Always big fans of the BLT, this sandwich with very (un)healthy portions of bacon did not disappoint. 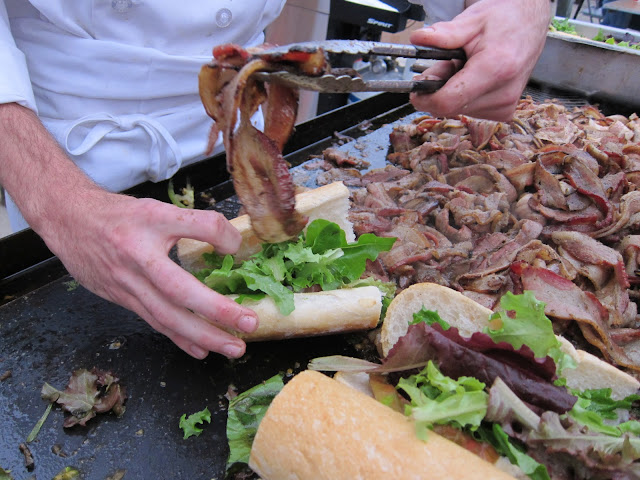 Looking for something on the lighter side after all that meat, we lined up for the other offering from Grand Isle.  Their smoked fish po-boy had just been announced the winner for “Best Specialty Seafood Po-Boy,” and rightfully so.  This time they spread the bread with fried caper cream cheese.  On top of a bed of forked chunks of smoked fish, they laid a pile of arugula tossed in vinaigrette, sliced red peppers, fresh dill and pickled red onion.  The flavors complemented each other perfectly.  It went down smooth and was a nice way to play us out of this year’s festival. 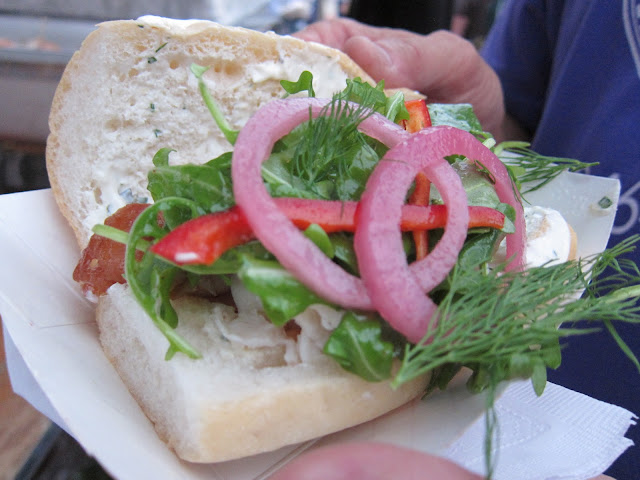 Oh man!! I would love to sink my teeth into that boucherie po-boy.  I think another trip to New Orleans is in order!!  Thanks Dave and Jen!
Posted by Alicia at 8:40 PM