The end of a semester and the completion of finals is an occasion worth celebrating in our household.  Rafe was already home when I returned from work, happily strumming his guitar, drinking a spot of bourbon, and smiling.  He had taken his last test - which means!
We're halfway done with Law School!
A drink at home was not enough celebrating for me...Oh NO!  Need I remind you that I'd moved here during the height of his studying?  We needed to go OUT!  My treat.  Anywhere his heart desired.
He settled on Grant's; an Italian restaurant owned by local restauranteur Billy Grant, conveniently located in West Hartford center.  This place was not new to us by any stretch.  When we are hanging out with friends we often visit this establishment to have drinks at the bar.
The weirdest thing:  though we had been here countless times, we had never eaten here.
We were in the mood to keep it casual - so we took a seat at the bar.  Though it was not as crowded as we are used to on a Friday night, I would consider the atmosphere fairly bustling for a Wednesday.
We sat down and I ordered a prosecco (and immediately thought of Meghan) and he ordered a draft....and we settled in to peruse the menu.  Entrees here are not cheap, and as we were walking in we thought we'd like to just split a couple appetizers, then make dinner when we got home.
The appetizers were a little thin on the 'shareable dishes', but the 'mussels in saffron dijon broth' ($10) caught both of our attention.  Rafe suggested we add an order of fries ($5), as a makeshift moules frites.  There was no argument from me - so we placed our order and caught up on each others day.
Shortly there after a large bowl of mussels was placed on the bar in front of us, flanked by two slices of toasted country bread, spiked with a garlicky oil.  And, though the mussels were gorgeous, they required utensils, and I was incredibly hungry. I immediately reached for a french fry and was delighted with the salty, crispy exterior.  Rafe actually didn't think they were crispy enough - but I argued that he waited until the mussels were done to dig in.  I think fries must be eaten immediately out of the frier.
The accompanying dipping sauce tasted reminiscent of thousand island dressing.  Rafe opted for ketchup - as he does not care for mayonnaise based anything. 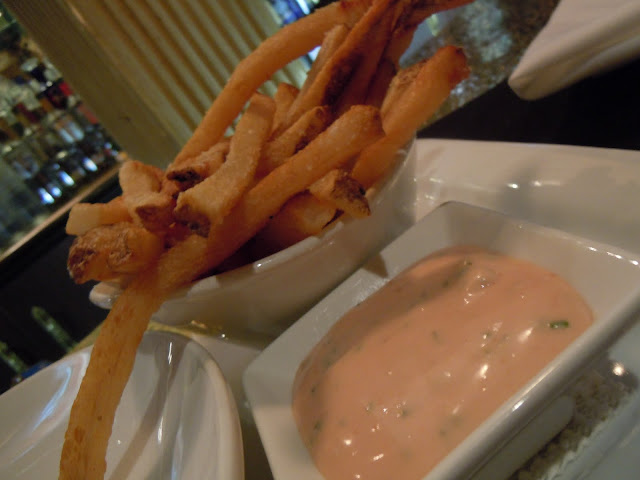 The mussels were delicious.  They were perfectly cooked and tender, and there was not a single un-opened shell in the bunch.  I find it super annoying when I find one- its pretty irritating when they aren't removed - and I appreciated Grant's attention to detail.  The broth was aromatic with saffron, and just a hint of dijon without overpowering.  Unlike some mussels dishes where the bivalves are swimming in their broth, these only had a little liquid accentuating their natural flavors, but there was enough left behind for us to enjoy with our bread. 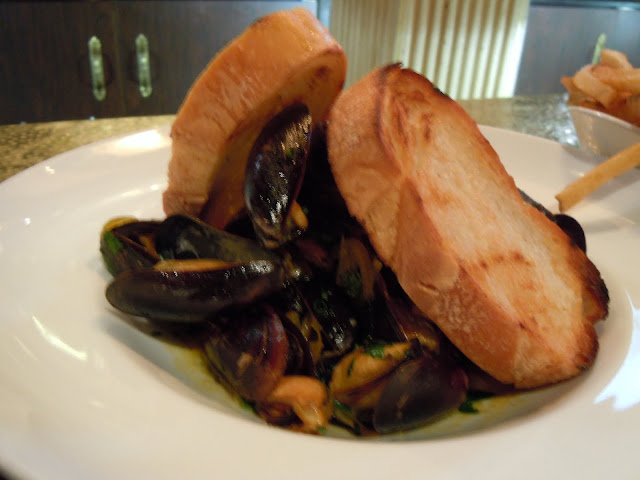 As we settled our bill, and made our way to the door, we decided making dinner at home was completely unnecessary.  The portions and the flavors at Grants had sated us for the night.  We returned home to relax, until next semester.