I've had my eye on the Tortellini En Brodo recipe from Fine Cooking since the issue came out in December.  A Biba Caggiano Italian recipe with the detail and rigor I have come to expect from Fine Cooking - and with the pages and pages of steps that makes me SO excited for a cooking project.
I delcared in December that I would make this recipe once we settled into our new place, so now that we  have been here nearly a month I knew it was time.
Any great soup starts with a good stock. And although the recipe includes Biba's stock, I hoped that she wouldn't mind if I used my own recipe. I had roasted a chicken a few nights earlier, and I thought it a shame to waste the chicken. I made my stock from the leftover chicken along with aromatics.
Into my dutch oven went:
1 leftover chicken
2 carrots
2 celery stalks
small bunch of parsley
1 onion, split
the end of a bunch of garlic (about 4-5 cloves)
about a teaspoon of black peppercorns 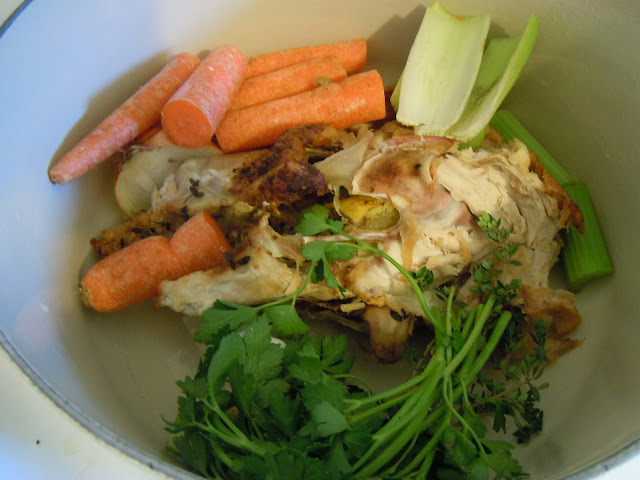 I covered everything with water and brought it up to a boil, then reduced it down to a simmer. As foam formed at the top, I skimmed it off. 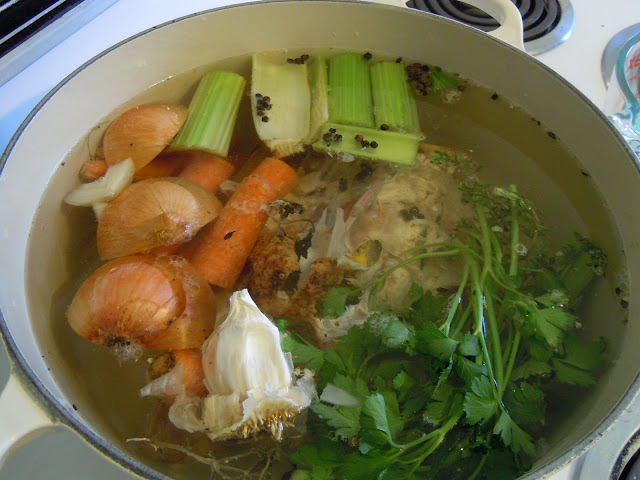 Making stock always makes me think of making tea - since you basically just steep everything until the flavors impart their essence into the water.
Once the stock had simmered for a few hours I shut off the heat and let it cool. Then I strained the mixture into a bowl, cleaned the dutch oven, and put the stock back into the pot and into the refrigerator.
I skimmed the fat off of the top of the broth before reheating it to cook the tortellini.