As much as I love my cookbooks and food magazines, there are a lot of occasions when I just cook something on the fly so I can use up leftovers, and extras in the fridge. Since I moved to Hartford I've put myself on a bit of a budget, so it is imperative that I don't overspend on groceries -- it means less fancy ingredients, and more ingenuity.
This meal started with half a pint of grape tomatoes that were just beginning to get a little, um... wrinkled. I decided that since their texture was already going to be compromised, I might take advantage by roasting them. I sliced them in half, tossed them with some oil, salt and pepper and put them on a baking sheet to roast at 350. 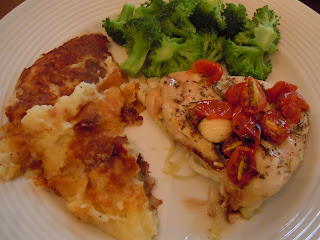 We had two chicken breasts thawing from the freezer--  I usually buy a ton when there is a sale and freeze it in smaller portions.

I've been obsessed with making something in papillote for a while, but since I was out of parchment paper I figured I could make it work with some foil. I made two pouches for my chicken, then seasoned the breasts with herbs de provence, and sliced leeks. 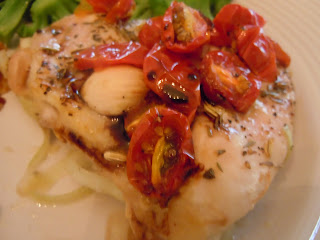 Rafe had recently made his delicious mashed potatoes, a recipe that ALWAYS yields leftovers. Since I needed to wait for the chicken to cook anyway, I decided to butter up a saute pan and plop the taters in to brown. This made a delicious potatoey pancake that was creamy in the center, and crispy and buttery on the edges. 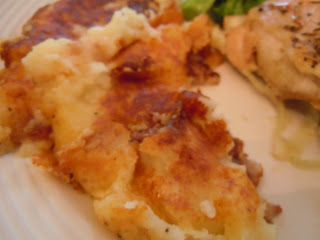 Once the chicken was just about cooked through I opened the foil packet and gave them 5 more minutes in the oven to brown. Then plated them topped with the roasted tomatoes. 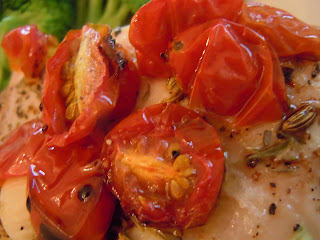 I then drizzled the chicken with just a little syrupy aged balsamic, and finished off the plate with some steamed broccoli. 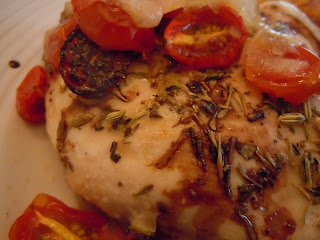 What I really liked about this recipe in addition to the relatively (compared to some of my favorite cookbook recipes) quick prep time, was the cleanup. The cooking vessel for the chicken was just some tin foil, and the tomatoes roasted on top of a silpat, which is one of the easiest things to clean.
Do you cook mostly from recipes? or do you just throw things together on the fly?
Posted by Alicia at 6:00 AM